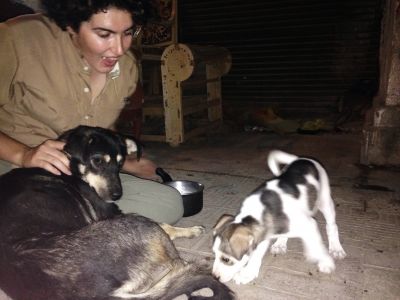 The Dognapping
It began with my puppy’s mother. She greeted me whenever I approached my apartment in Downtown Cairo. She never jumped or barked, and would often accompany me to the corner. In another life, she would have been a beloved family pet, but she was born an Egyptian street dog. I named her Basbousa.

I should have assumed that Basbousa had puppies from her swollen breasts and her unwillingness to stray far from my building, but it wasn’t until I saw them tentatively sniffing outside of the shuttered storefront next door that I realized Basbousa was a mother. She had four puppies. They were each about the size of two handfuls and just starting to explore the area outside of their den. I could have fallen in love with any one of them, but I quickly developed a favorite. He had two distinct black eyes and often sat slumped over, with his back legs splayed out awkwardly. This puppy was dopey and shy, but he played energetically with his mother.

One day, we came to see the dogs, but could only find the black-eyed puppy. We asked the doorman’s son what had happened to the others and without missing a beat he said, “They’re dead.” Distressed we pressed him for more details and he then said, “Someone took them,” and then, “They are in the den sleeping.” I had previously joked about taking one of the puppies, but the news of the missing pups sent me into a frenzy. If they had been exterminated (the most likely scenario) I needed to take my pup out of harm’s way. I ran to the shop to purchase a kennel, leash, and dog food. The next morning, scooped him up in my arms and took him to the vet.

In that moment I changed from one of the many who fantasizes about taking in one of Cairo’s street dogs to one of the few crazy enough to take one in.

Tails and Tribulations
Part of my learning process as a first-time dog owner was learning that he is a she! Imagine my surprise when the vet clarified the sex of my beloved dog, Jupiter.

This experience has taught me how time-consuming caring for another being can be. Sometimes it’s a lovely kind of time-consuming, where I look at the clock and find I have been playing and snuggling with the puppy obliviously for an hour. But it is also time-consuming in less enjoyable ways. During my four weeks of puppy ownership, I have visited the vet at least once a week for check-ups, vaccinations, and deworming, and the initial process of eliminating fleas was tedious. Puppies benefit from a regular schedule, so my day is often planned around Jupiter’s meals. There is always some mess to clean up just as you’re trying to get out the door, be it a toilet paper roll your puppy shredded or a wet carpet. Jupiter knows what time breakfast usually comes, and she makes sure I am awake for it, even if I’m trying to sleep in on the weekend.

Certain things that I thought would be difficult have been easier than expected. Puppies usually cry through the night when they are first separated from their mothers. Jupiter cried moderately on the first night and has slept soundly ever since. Jupiter was also newspaper-trained by the second day. Dogs tend to urinate where they have peed before, so if you place the paper towel you used to clean the dog’s mess on a newspaper, the dog is likely to follow the smell. When the puppy goes on the correct spot you simply reinforce with praise. Jupiter is quick on the uptake, not only does she use the bathroom properly, but she will also ‘sit’, ‘stay’, ‘lay down’, ‘shake’ your outstretched hand, stand on her hind legs to raise her ‘paws up’, and go into her ‘kennel’ on command.

Teaching Jupiter not to bite has proven difficult, and she is nearly old enough that puppy nipping is no longer an excuse. Her bites are always playful, but she doesn’t know how much her little teeth can hurt. She is unfazed by a spritz of water in the face and likes to lick the bitter spray that is supposed to taste repulsive to her. It is also difficult to give her the exercise she needs. Jupiter still hasn’t finished her vaccinations, and so is stuck in the apartment. When you take a puppy in, that dog must be observed for at least one week to be certain they are not incubating any diseases, and then it takes several weeks to complete the series of shots. Until those shots are complete the dog should not be exposed to other dogs, which puts walks out of the question.

It is difficult to raise a well-behaved pup, and these difficulties are exacerbated in Cairo. There are no dog parks to get exercise and I don’t have a yard. Street dogs make walks difficult, even once Jupiter is vaccinated. Not only are street dogs a risk to the bodily well-being of my puppy, but being around them can have negative impacts on her behavior. Even friendly dogs like Basbousa put my entire household at risk of fleas. On top of normal vaccination concerns, I need to be certain my puppy is prepared to move to the United States in December when I return home.

Raising Jupiter is a challenge, but a welcome one. She gives me a mission when I get home from work, and helps me to be less selfish and put another being’s needs before my wants. Sometimes I am asked what it’s like to raise a street dog, and the only answer I can give is exactly what it’s like to raise any dog. It’s stressful, comforting, challenging, and fun. Instead of funding abusive dog breeders, I’m giving a beautiful dog a better life than she would otherwise have. I aspire to do right by my puppy, and in return, I can have a loving (and hopefully well-behaved) companion in whatever comes next.

Follow Jupiter on Twitter at @permiepuppy! If you are currently raising a street animal, or if this story has inspired you to learn more, then we want to hear from you!

A Research Associate at the Research Institute for a Sustainable Environment (RISE) at AUC. Her passions include permaculture (ecological agriculture), feminism, zombies, and her beloved puppy Jupiter. 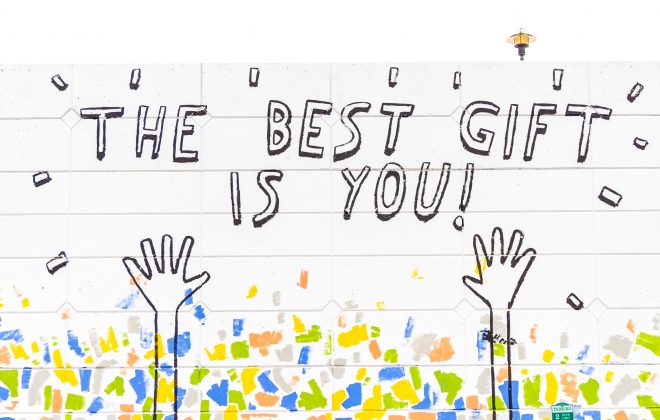