Home > Culture & Heritage > The gift that keeps giving: how an act of kindness gave Adier his teeth back

The gift that keeps giving: how an act of kindness gave Adier his teeth back

Adier is a 16-year-old refugee from South Sudan’s Dinka tribe. His lower front teeth were extracted at age 6; a Dinka cultural tradition practiced more in remote villages intended to testify to a young boys’ courage and ability to withstand suffering.  It took tremendous courage to survive childhood. At age 9, Adier fled his village barefoot and alone when rogue militia attacked, killing every local member of his tribe in one of the new country’s deadliest attacks in its short history. Adier survived because his mother pushed him into the river and took the bullet intended for her son. He spent the next five years struggling to find security until he came to Cairo as an unaccompanied minor in 2017. At 7 feet, 2 inches tall—and possibly still growing—he is an avid basketball player.

Dr. Mahmoud had a very different upbringing; the son of a prosperous oncology surgeon in Maadi, he followed his father everywhere—even into the operating room. He also followed his father into villages and less affluent areas where he treated people in need who could not afford medical care. “Egyptians practice the spirit of giving,” says Dr. Mahmoud, “because the government can’t meet the needs of Egypt’s expanding population who live below the poverty line.”

Not only did Dr. Mahmoud follow his father into the medical field, along with his brothers, ­­­­ and Dr. Islam, he also became a philanthropist. “I’d go with my father into the alleys, and people treated him like a hero; I still remember the looks on people’s faces when they told me how he’d worked miracles and saved their lives. I wanted to help people in the same way.”

Dr. Mahmoud and his wife Maram, an endodontist, do their share of charity work. He also works out installment plans and offers discounts. Patients come through referrals, “mostly through friends,” says Dr. Mahmoud. Adding that most of the dental problems he sees are due to poverty and illiteracy. “Diabetics are worse off,” he notes, “and diabetes is a huge problem in Egypt.” He adds that people with diabetes are at a higher risk for gum problems because of poor blood sugar control. Diabetes can destroy the gums and all the tissues that hold the teeth in place. And gum disease, like any infection, can cause blood sugar to rise. So if you’re not already a diabetic, gum disease can increase the likelihood of becoming one.

The loose teeth and tooth decay he sees on a regular basis could be prevented if a government-funded campaign made all people in every sector of society aware of how to care for their teeth. Poor dental hygiene causes bacteria to flourish; “this weakens the immune system,” says Dr. Mahmoud, “and causes bone loss, gum disease, and rotten teeth.” He adds that studies have linked heart disease to gum disease, and a lack of teeth can cause digestive issues, all preventable with proper brushing and flossing. He points out that the government has provided successful media campaigns for breast cancer and hepatitis C—perhaps dental care is up next?

Dr. Mahmoud stays current on medical breakthrough as a National Research Center lecturer; research teams carry out projects “and come up with data,” he explains. Egyptian nationals volunteer to participate in clinical trials, like the group that brushed with toothpaste while another group brushed without. “We did find a very significant number of bad teeth,” Dr. Mahmoud observes.

Infection that goes into the bone escalates the problem from a simple abscess to swelling that can travel to the brain. Diet and regular checkups can make a big difference in terms of healthy teeth, but “many people can only afford to eat carbohydrates; they don’t chew enough or brush at all sometimes. Changing habits can be difficult or financially impossible. Often people –especially in rural areas, only learn the value of their own teeth when the pain becomes unbearable.”

Root canals can save teeth, and Dr. Mahmoud’s pro bono patients are served by a stable of young doctors. However, Dr. Mahmoud chose to work on Adier’s teeth himself. He met the young man when a longtime client brought him to the clinic, and he was moved by the teenager’s gentle manners and miraculous escape from genocide. “I think the tribal ritual of removing young boys’ front teeth is devastating,” says Dr. Mahmoud. “Lower front teeth are essential not only for chewing but for speech confidence.”

Adier hopes to be at school in America soon. He was accepted at Hargrave Academy- a school famous for its basketball team, in Chatham, Virginia. He is waiting for funding from a sponsor. Meanwhile, he looks for odd jobs, works out at the CSA gym, and audits classes at AUC. “It makes me feel satisfied,” says Dr. Mahmoud, “to see Adier smile. It touches my heart.”

Brooke Comer is a writer and advocate for social justice who works with refugees in Cairo.

The Alphabet of Wilderness 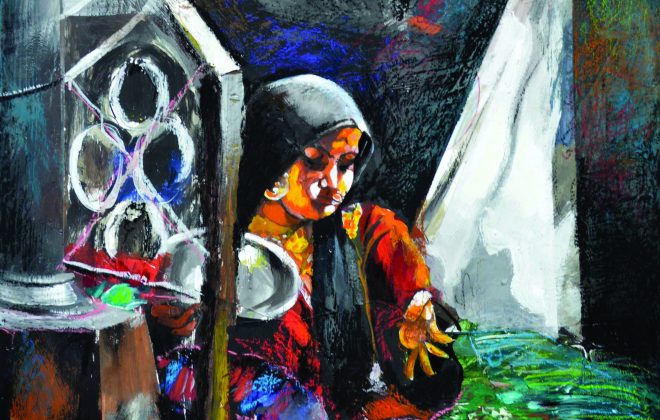